The China Agricultural Machinery Circulation Association released the China Agricultural Machinery Market Sentiment Index (AMI) of 37.9% in December 2022, down 5.9 percentage points sequentially and 14.3 percentage points year-on-year. In terms of ringgit, among the six primary indices, all of them showed a downward trend except for the inventory index and manager confidence index, which increased. Among them, the efficiency index dropped the most, by 16.8 percentage points. From a year-on-year perspective, all six level 1 indices showed a downward trend, with the efficiency index declining the most, by 21.5 percentage points. 6 level 1 indices are all located in the slump range. 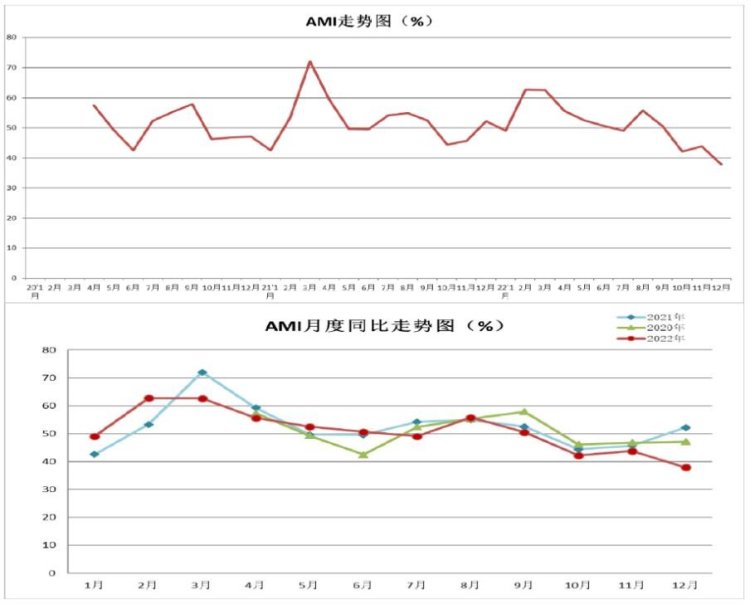 According to contributing analyst Zhang Huaguang: December's AMI ended with a small decline in the chain and a significant year-on-year slide. 37.9% of the boom, a cold value, is alarming. It not only set the lowest value of the annual prosperity in 2022, but also the lowest value since 2020 (except for January-March not counted). And all this happened in the first month of the official implementation of the National III to National IV slot on December 1 last year. Such a bad ending, is it a coincidence or inevitable? Is it an objective demonstration of the development trend of the agricultural machinery market in the past year? Or is it a warning for the new year market that has started in 2023? All deserve our deep thinking.

The basic features of AMI in December

Third, the "green across the board". The five secondary indices monitored this month, whether year-on-year or year-over-year, all show varying degrees of decline, and are located in the recessionary range. From another dimension to explain the December AMI experienced in recent years a rare dismal situation.

In December last year, AMI was so dismal that it was caused by a fatal "cocktail" generated by the superposition of multiple negative factors such as the epidemic, national three to national four, and the season. From the seasonal factors, December is the traditional off-season agricultural machinery market, market demand is weak; from the epidemic factors, in the epidemic prevention and control after the release of the epidemic, resulting in a large rebound in the domestic epidemic, the market has a greater impact; from the national three to upgrade the impact of the national four, this month is the first month after the upgrade of the official operation of the national four machinery, market demand conversion and adaptation period decided this month, the agricultural machinery market has not entered the normal development Orbit, and the upgrade led to price increases, conducted to the terminal, directly generate customer indecision and market weakness downward pressure, become an important factor in the market decline.

Analysis of market segments from the three-level index

From the six tertiary indices monitored, in addition to the bottom of the boom in November and a small rebound in December crawler grain combine harvester, the other five market segments have declined significantly.

Tractor market. December became the most dismal month of the year tractor boom index, whether secondary index or tertiary index, whether monthly ring or annual year-on-year, there was a substantial decline. From the prosperity, two tractor index, as well as three large and medium-sized tractor index prosperity have fallen into the bottom of the year, respectively, 32.8%, 32.5% and 32.7%. From the month-on-month and year-on-year, the chain of 17.2%, 20.8% and 17.1%, respectively, a substantial decline of 17.1%, 15.1% and 14.2%, respectively, year-on-year.

Although the tractor month-on-month performance is poor, but the annual market performance is very bright. Market monitoring shows that in 2022, China's cumulative sales of various tractors 610,900 units, a solid growth of 12.96%. Among them, the large and medium tractor market grew substantially, the cumulative sales of various models of large and medium tractor 460,400 units, a significant increase of 22.77%. The total sales of medium tractors (25-100hp) amounted to 313,600 units, up 15.04% year-on-year, accounting for 68.11%, down 4.58 percentage points compared with the same period last year. The sales of large tractors (above 100 hp) amounted to 146,800 units, climbing 43.36% year-on-year and accounting for 31.89% of the total.

Not only the strong performance of the domestic market, but also the export market also showed strong momentum. 2022 January-November, China's tractor machine accumulated exports amounted to $ 756 million, a substantial increase of 19.11% year-on-year.

Harvester market. The harvesting machinery index ended with a boom of 39.7%, hitting a new low for the year. Including wheeled, crawler type, including the two major grain combine harvester boom index performance seems to be the opposite of the wheeled ring, respectively, a significant decline of 11.2%, crawler ring growth of 4.1%, but in fact, the same way, because the growth of the crawler grain harvester index is based on last month's substantial decline in the generation of "depression" above. Then look at the year-on-year, respectively, a sharp decline of 23%, 19.9%, further illustrating the poor performance of the grain harvester market. The corn harvester boom index ended the year with the lowest boom of 39.1%, with a 15.1% and 12.3% decline year-over-year, respectively.

Harvester exports in 2022 showed a volume increase and decrease in volume. Customs statistics show that, as of the end of November, China's harvester machine total exports amounted to $ 309 million, a small decline of 0.08%; the number of exports 178,100 units, an increase of 23.33%.

Planting machinery market. 2022, planting machinery market ice and fire with the furnace. On the one hand, the seeder market grew substantially, market monitoring showed that the annual sales of 180,000 units, a solid year-on-year growth of 12.15; on the other hand, the rice transplanter market declined significantly, with annual sales of 67,400 units, a significant decline of 18.4%.

The sinking of the agricultural machinery market in 2022 did not end, and it may become the beginning of the market decline in the first half of 2023. The AMI is expected to continue to fall in January from a year earlier, and to slide sharply from a year earlier. The primary and secondary indices continue to maintain in the recession range, but do not rule out a small rebound in the ring for some indices that have hit the bottom; few of the tertiary indices have entered the boom range, the ring or rise and fall differently, and the year-on-year or the whole line continues to sink.

In January, the agricultural machinery market is facing a serious and complex market situation. Demand contraction, the impact of the epidemic, the national three to the national four of this year's market overdraft, the expected weakening, as well as the national four run to bring the price of agricultural machinery, such as "five pressures" increased, but also the impact of the Spring Festival, the traditional off-season support, more so the already fragile market is even worse. Although there is December managers confidence index to 41.7% of the boom to close, and a 6% increase in the ring, but this growth is based on the ultra-low boom last month, and does not indicate that managers to restore confidence in January this year. On the contrary, managers' lack of confidence in 2023 is corroborated by our research on more than 1,300 typical dealers not long ago, where more than 70% of the dealers surveyed believe the market will decline or remain flat in 2023.

Looking at the development pattern that AMI has developed over the years. First, in December 2021, AMI was at a higher boom of 52.2%, deciding to face the "high ground" of last year's boom in January this year, thus deciding that there will be a decline year-on-year; second, in 2021, in response to the price increase brought about by the National III to National IV, there are some dealers "hoarding", consumers early consumption and other phenomena. In fact, many agricultural commodities did not enter the terminal, the first half of 2022 digestion of such goods will become the main task of some dealers; third, from AMI in recent years trend analysis, since 2013 to 2021 9 years, January this year and December last year, the ring increase drop less, but based on the special nature of this year's market, this law may be broken.